One Sunday morning last month, I observed an extraordinary interaction on Facebook.

A Facebook group administrator decided that a member’s comment was inappropriate. The admin deleted the comment, and described his/her reasoning based on his organization’s core values.

The organization? The National Museum of the Marine Corps. The values: “Honor, Courage, and Commitment.”

The museum’s Facebook administrator was able to directly relate action to each of these values. This took place over a brief period late one Sunday morning…I’m doubtful that the admin held a meeting, made a call to the boss, or mobilized a PR agency. 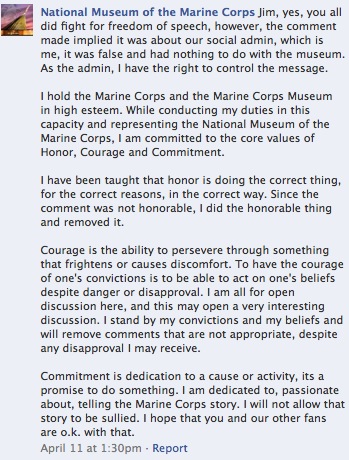 Later that week, the museum started a discussion about censorship. You can read it here.

Leaders, what would it feel like to be able to trust your your people to respond like this? More to the point: can you connect your values, precisely, to your expectations — of others, and of yourself?

Photo: “Giant Value” by flickr’s Matt Biddulph, used under Creative Commons license.  And the screen shot from the National Museum of the Marine Corps Facebook page is reproduced here with the permission of the person responsible for social media at the Museum.

This short video is worth watching, if you’re contemplating what it takes to develop expertise.

And my experience/opinion? The 10 year rule definitely applies with regard to developing world class general management skills — but someone ascending the learning curve can definitely make a solid contribution on the way up.